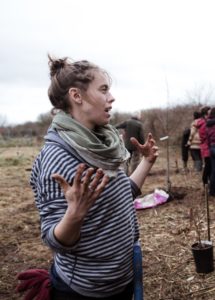 Hello. I am a storyteller: a lover of tales (and tails), animals, the natural world with all its lyricism, and magical Otherworlds. I have been told one of my key life skills is seeing the animals in people, and the people in animals. I enjoy finding both the underbelly and the mischief in life. I largely aspire to be a witch-badger-wild woman in training; I love exploring different lands, meeting other humans, crashing about, listening to the beasts, narrating the world around us, and laughing. These days I’m often lurking around Bristol and the West Country.

I tell stories from here and there – traditional, adapted and invented – at events and festivals, forest schools and storytelling nights, around the fire or in hushed rooms, into the ears that will listen, to trees and birds and anywhere else I have not thought of yet! If you require a story to entertain, to awaken, to bring people together, or for a bespoke project or event, please use the contact page to connect with me!

After my imagination went to sleep post-childhood, I woke up and loitered around the tails of stories for several years before I dabbled in some telling following a course with an amazing teacher in 2012, thanks to the gentle encouragement with which he urged me over my cliff-edge of fear. 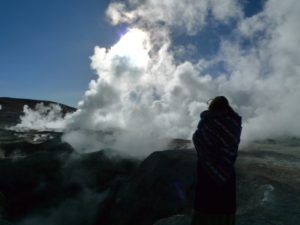 Photo by some bloke called Max

Then I ran away to East Africa for several years and thought I’d escaped. But stories came to get me and I ended up in the depths of a project in South Sudan collecting folktales for use in radio and street theatre, with a crew of brave souls. We used stories as a means of exploring society and its values, and aimed towards cultivating greater understanding between communities in conflict, by tapping into elements of common humanity.

This experience reminded me that stories can be powerful things – including if they are used destructively – and reignited hope and inspiration which had been lost in the realms of futile, hollow-worded politicking. In a land where there are virtually no psychological services, where there is a breakdown in traditional means of collective healing, much trauma and ongoing war, I was left with a deep interest in how stories have the potential to assist with healing some of the rifts, because they are tools that can get people sharing and talking. I suspect the only way change will happen in this world is if people awaken to it inside their own hearts and minds across all levels of society; I believe stories can help because they speak heart language.

So finally, after some encouragement from friends, I got on with it and was initiated through the Beyond Words course at the International School of Storytelling in spring 2017 – a true journey of the soul. I have since been telling and creating, listening to nature and taking note, and slowly perhaps I’m sneaking up on this idea that there might be things we came into this life to do…

What is The Badger’s Way?

The badger’s way is a totemic idea I carry about knowing you’re on the right track in life. The badger’s way is unorthodox, intuitive and wild. It must be sniffed out. No combed hair or polished shoes. Taking the badger’s way through the land for a while is a way to shake up the normative thinking and open up the wilder neurons, remembering or relearning to hear our intuition over all the noisy fears of life.

It came about as an idea when my sister and I attempted to walk from Glastonbury to Wells one evening, strictly as Crow flies. What we didn’t reckon on was that this was Somerset; each field was land carved from an old flood plain, and thus surrounded on all sides by a stagnant moat, sometimes crotch deep, it turned out. We tried looking for bridges, wading, leaping the deer-trod paths (we are NOT deer). Until finally we realised the only way to navigate successfully was to get low to the ground and sniff out The Badger’s Way. We eventually arrived in Wells at about 11pm, a whole lot wiser than when we’d set off that morning.

So the badger’s way is what I am endeavouring to tread, despite the pulls and cajolements of the overculture. It has become for me a way of knowing, going, finding out, staying close to a truer path of soul. Stories are a fundamental part of that.

I invite you to try it one day. Step out into whatever nature you can access that is in any way wild. Badgers’ highways are well trodden by heavy paws, but they obey the logic of a roving rummager about 30cm high. It will be an unorthodox passage, no quiet amble, but a wriggle through a hedge or a slide down a ditch, crawling, sticks in hair, scratched to pieces at least. If there are no badgers try a rabbit, or even crow. If and when you make it home again, you might just carry some of that wildness with you to your downy nest that night.

Sometimes I wish I were a weasel, or a wild horse, when being a human gets a bit much. I’ve always lamented the loss of our tail as a species, I miss mine and I wonder what evolution was up to when she snatched them from us. A tail is grounding; it makes me feel like something’s got my back. When I don one, I feel whole, in touch with an innate wild self that can throw off the chains of the inner pigs – the little judgemental police force inside us that criticise, measure and silence us so we commit no social faux pas. Those guys have less power when I have a tail on.

For more info see the blog page A Feather from the Crow’s Nest or click here: Why I love stories…. 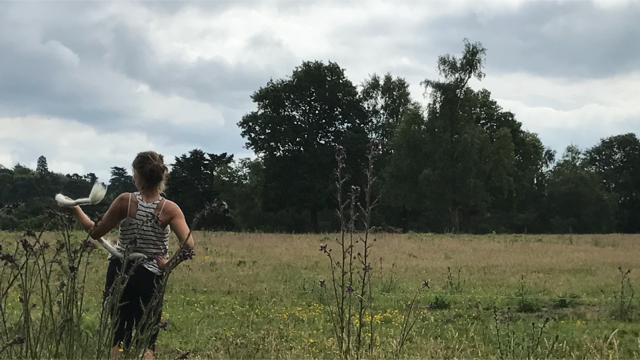